Puerto Vallarta is one of the most vibrant and lively cities in the world. Many North Americans actually move here to escape the cold winters and the work-obsessed lifestyle that is prevalent in most places in the US and Canada, and they find themselves in a pocket of paradise on the Pacific coast of Mexico. Puerto Vallarta is situated in the Bay of Banderas where many humpback whale sightings are as well as sea turtle hatchings. Yet the beach and wild marine animal sightings are only half of what this place has to offer.

Most of the activity and attractions are located within la Zona Romantica, the southern area of the city. This is where you’ll find Los Muertos beach and pier, the hipster cafes, the gorgeous European cobblestone roads, and part of the Malecón. The Malecón is a beachside promenade extending the entire length of the city, and you could spend your entire day on this boardwalk.

Los Muertos is probably my favourite landmark in the whole city. This beach and pier see many people throughout the day, but the best times to come are in the morning (around 8-9 am) and sunset. Of course, sunset should always be spent on a west coast beach if you’re in reach of one! Jason and I flew our little drone here and the footage was absolutely fantastic (click here for our Puerto Vallarta video)! But we were incredibly weary of the hundreds of pigeons on and about the pier. If you plan to fly your drone here, it’s completely legal but be careful not to make any sudden movements of the drone while piloting!

Walking away from the beach and into the town, you’ll start to find the cobblestone roads, views of the hilly neighbourhoods, the rustic yet colourful buildings and many, many cafes, stands and restaurants. As we headed towards Starbucks Basilio Badillo (where I debated on whether to get the Been There mug), we spotted a fresh fruit stand just half a block away where a young couple was making freshly pressed juice, smoothies and fruit & granola bowls. There was a high demand for what they were offering based on the lineup of locals waiting to get their morning breakfast. Jason and I ordered a grapefruit pineapple smoothie and his parents asked for a bowl of papaya with yogurt, granola and honey when they saw what another lady had ordered. Their massive container of papaya was only 35 pesos ($2.50 CAD) and so was our smoothie! Beats the expensive and overrated berry-yogurt-granola drink I got at Starbucks for like 80 pesos… 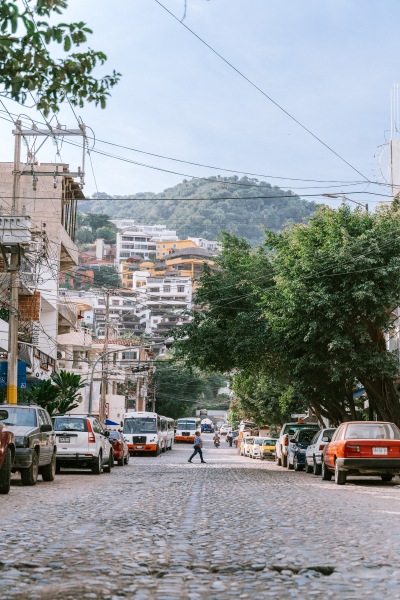 In this area there are a gazillion taquerias but again, right across a street was a taco stand that looked incredibly hyped. Tacos al pastor were only 16 pesos ($1.15 CAD) and they were absolutely bomb. Let me tell you, best tacos I’ve ever had! Whenever you’re looking for good local food, try to find the areas that have a crowd of locals huddling around it. It’s always going to be cheap and authentic.

After our fruit and taco eats, we continued walking north and towards the beach again. That’s when we found this cute bench park with nearly every bit of concrete tiled with mosaics. We watched as a couple of ladies continued tiling their beautiful work as we walked through this plaza. This place is called Estacionamiento Lazaro Cardenas Park. Right across from it is a street lined with local vendors. There’s pretty much everything a tourist would want right here. We turned north along the street and headed for the beach and Malecón again. Because this is a heavily touristy area, there are many vendors who try to sell hair braiding services, jewelry, coconut water and excursions. We gave in to the coconut guy and bought a massive coconut! After seeing a local family ask the guy to open up the fruit to scrape off the meat of the coconut, we asked him to do the same for us. We were surprised to see him sprinkle salt and spice on the flesh of the fruit but I was actually so obsessed with the flavour and texture! What a waste it would’ve been to throw away the coconut after simply drinking the water.

So after our fruit, smoothies, tacos and coconut eating, it was time for a coffee. We chose to walk back as there was a cute and highly-rated cafe called A Page In the Sun on Google Maps. Though the prices here resembled the costs you would find back home in Canada, it was still a great place with great coffee and food! It also has an immense library of books in English, French and Spanish that would light up a bookworm’s heart. There were so many classics to browse through that a reader would never want to leave.

Fisherman in the Bay of Banderas

Back onto the Malecón, there are incredible local artists you’ll find in the area near the Parish of Our Lady of Guadalupe. When we come back here in May, I’ll be sure to browse through their work because what I spotted last time was truly spectacular. But the next stop for us was the cathedral, which is a hub for many tourists.

We actually walked into the church in the middle of mass but it was a very welcoming environment. No one cared about what you wore, or how many cameras you were carrying. It was a very humble gathering and we were really happy to see all the local folks come to worship our Lord. Our Lady of Guadalupe stands like a centrepiece on a well-decorated table. It certainly captured our view as we walked along the adjacent streets, and it was easy to gravitate towards it when we came back to meet Jason’s parents after doing our own adventuring. 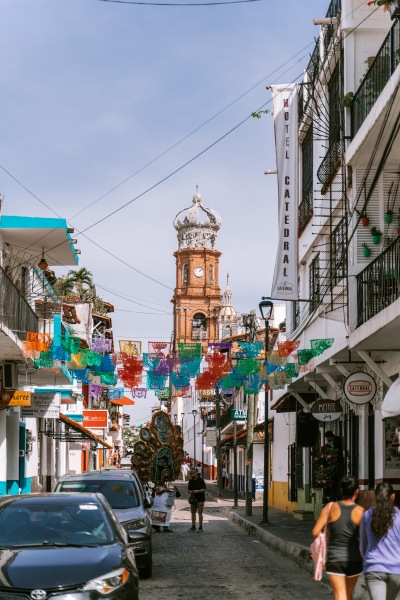 Right across from the church entrance on the left block sits a small restaurant called El Campanario. Jason found it on Trip Advisor but it made sense to eat lunch at such a convenient place. We expected the food prices to reflect on the fact that it was on a very touristy street, but we were wrong! For only 78 pesos ($5.50 CAD) we each had a 3-course meal: a soup of the day (which was lentil soup), a choice of 7 different dishes like enchiladas, fajitas, tacos, etc., a juice of the day (which was pineapple juice) and a mini flan pudding. I was already full from all the eating we did, but it was SO GOOD that I couldn’t help from scarfing it all down.

Again, back onto the beachfront promenade, you’ll see Los Arcos and the Seahorse Monument with the colourful Puerto Vallarta sign. The great thing about Puerto Vallarta is that all the attractions and landmarks are within walking distance. You could keep going further north to la Zona Hotelera and spend the afternoon at one on the hotels on a day pass – I’ve seen the Marriott Resort & Spa be recommended: with 600 pesos you’ll get to spend the entire day here with 500 pesos credited back to you for food and drink. Or you could head back south, past Los Muertos and towards Playa Conchas Chinas, the best clear water beach in town.

You probably don’t need more than a day to spend in the town because everything you’ll want to see and eat is within a small radius of Puerto Vallarta. It’ll make for a comfortable and relaxing visit, with most of your time spent eating and staring out at the view of the Pacific Ocean. But no matter what, if you’re staying in Riviera Nayarit or Jalisco, be sure to take a day or half a day to see this beautiful town!

All photos are taken by my love, Jason Meng.

View all posts by laurenslighthouse